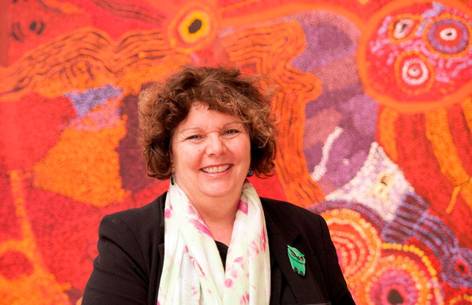 Nici Cumpston, in front of a women’s collaborative painting by the Ken Sisters from Tjala Arts – Photo Courtesy Saul Steed

On Thursday 26 September, Premier Jay Weatherill announced the establishment of an Aboriginal and Torres Strait Island visual arts festival to be hosted by South Australia in the Spring of 2015.

The festival will feature:

The role of inaugural artistic director for the festival has been appointed to accomplished artist and curator, Nici Cumpston. Cumpston, a Barkindji person from the Darling River in New South Wales, was announced the winner of the Premier’s NAIDOC award this year. She is also the first Aboriginal curator appointed to the Art Gallery of South Australia where she has been working as Associate Curator of Aboriginal and Torres Strait Islander art and Australian Paintings and Sculpture for the past 5 years.

In her artistic statement, Cumpston underlines exciting developments within the Aboriginal art world and the direction of the festival:

‘Today, Aboriginal and Torres Strait Islander art is heading in every direction – no art form is off limits. The world’s most ancient cultures are embracing the most innovative modes of expression…This festival will provide an opportunity to celebrate the ground breaking vision of Aboriginal and Torres Strait Islander culture and heritage.  We will be showcasing emerging and established artists who are working within and across mediums including painting, drawing, printmaking, woven and carved sculpture, textiles, ceramics, and film-making including animation.’[1]

This exciting endeavour marks a huge step towards achieving the “ambitious goal of making South Australia the international hub for Aboriginal visual art” as expressed by Premier Weatherill.[2]  The festival aims to strengthen South Australia’s leadership in the appreciation of Aboriginal art which dates back to 1939 when the State was the first to display the work of an Aboriginal artist, acquiring a work by Albert Namatjira.[3]

This polyvalent world-class event is supported by the State Government, the Art Gallery of South Australia and BHP Billiton who have invested $4 million.