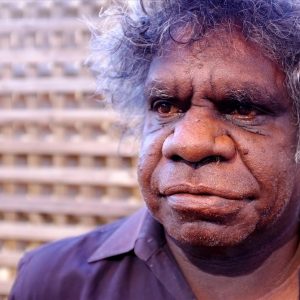 Mervyn was born at the Telegraph Station in Alice Springs in 1958. His mother Cynthia (Kamara) Obitja was a Western Arrarnta woman. His father was the late Mr Wenten Rubuntja Pengarte, a famous painter. His father was an important role model for Mervyn. He was a senior lawman and a respected member of his community. He fought for Aboriginal rights and protection of the land working alongside the Central Land Council and assisted in the Mabo agreement. He considered that the dot form of art is the ‘law’ and the watercolour form is the ‘song’. He described the dot form of acrylics and watercolours as an interchangeable way of representing the country. (*)

Mervyn has followed in his father’s footsteps painting in the watercolour style that his father taught him. When Mervyn was 13 years old, his family moved to Hermannsburg this is where he first saw watercolour paintings, as he watched his uncles Maurice, Oscar and Keith Namatjira painting like their father Albert. Arnulf Ebatarinja, another uncle, kindled Mervyn’s painting talent when he gave him some watercolour paperboard and taught him to paint. Mervyn’s family moved back to Alice Springs in 1975 and he began to paint with Basil Rantji who taught him how to mix colours.

Featured in these Exhibitions

Tjuritja Nana Mara to Paris – Watercolours from the Namatjira Artists