Exhibition at the Consul-General of France’s residence 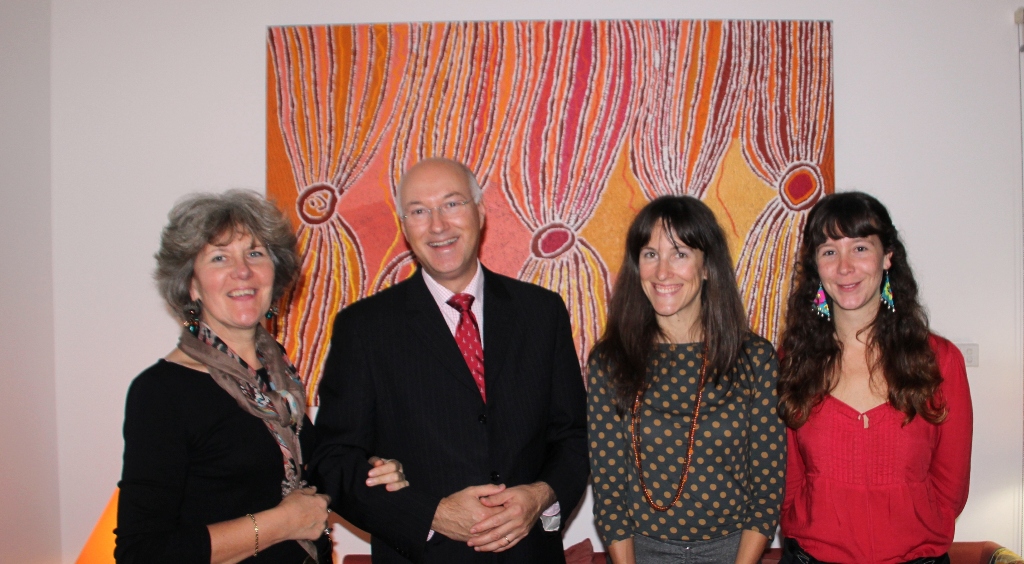 The Consul-General of France in Sydney, Mr. Eric Berti and his wife Madeleine, mandated IDAIA to organise a special exhibition at their residency. Coinciding with the launch of Lena Nyadbi’s monumental rooftop installation at the musée du quai Branly in Paris on 6 June 2013, the exhibition celebrates this spectacular contemporary art project and more generally the strong links between France and Australian Indigenous art. It also corresponds to the Consul’s will to develop relationships with the local New South Wales (NSW) Indigenous artists and stakeholders, and to recognise their incredible resilience and artistic innovation capacity.

The exhibition gathers prestigious artworks from important senior artists playing a crucial role in their community, such as Northern NSW’s Kamilaroi woman Aunty Berverly May Hinch or Aunty Esme Timbery Russel from La Perouse, as well as younger generation artists. A selection of works from touring exhibition Gestuelles – the art of transmission by Aboriginal desert women is also included to complete the curatorial concept.

This exhibition also presents exquisite shell works by artists of La Perouse, Central NSW. For Aunty Esme Timbery Russel and her daughter Marilyn Russel, these art works are a continuation of the Bijigal artistic practice and also a very important healing process. It gives them a context within which to reflect upon their past and to share personal and traditional stories. According to respected Aboriginal curator and academic, Hetti Perkins, “this work interrogates what is and what isn’t Aboriginal art; it challenges stereotypes, what’s contemporary/ what’s traditional, what’s art / what’s craft; and how craft becomes collectible art”.

A selection of works from touring exhibition Gestuelles – The art of transmission by Aboriginal desert women, curated by IDAIA in partnership with the Embassy of France in Australia, complete the exhibition to showcase important artist leaders who have also been playing key roles in their remote desert communities and have been involved with prominent French anthropologists. This includes a masterpiece Wakirlpirri Jukurrpa  (Dogwood Tree Dreaming), 2009 by senior warlpiri artist Liddy Napanangka Walker from Yuendumu, Central desert. Liddy started painting not long after the art centre of Warlukurlangu Artists opened its doors in 1986 and she is now as one of the most respected senior members. Her work is characterised by her use of warm, shimmering colors representing the richness of desert bush foods as well as beautiful, dancing lines. Liddy’s works are in the collections of the most important museums in Australia and overseas, and have been exhibited in more than 100 exhibitions.