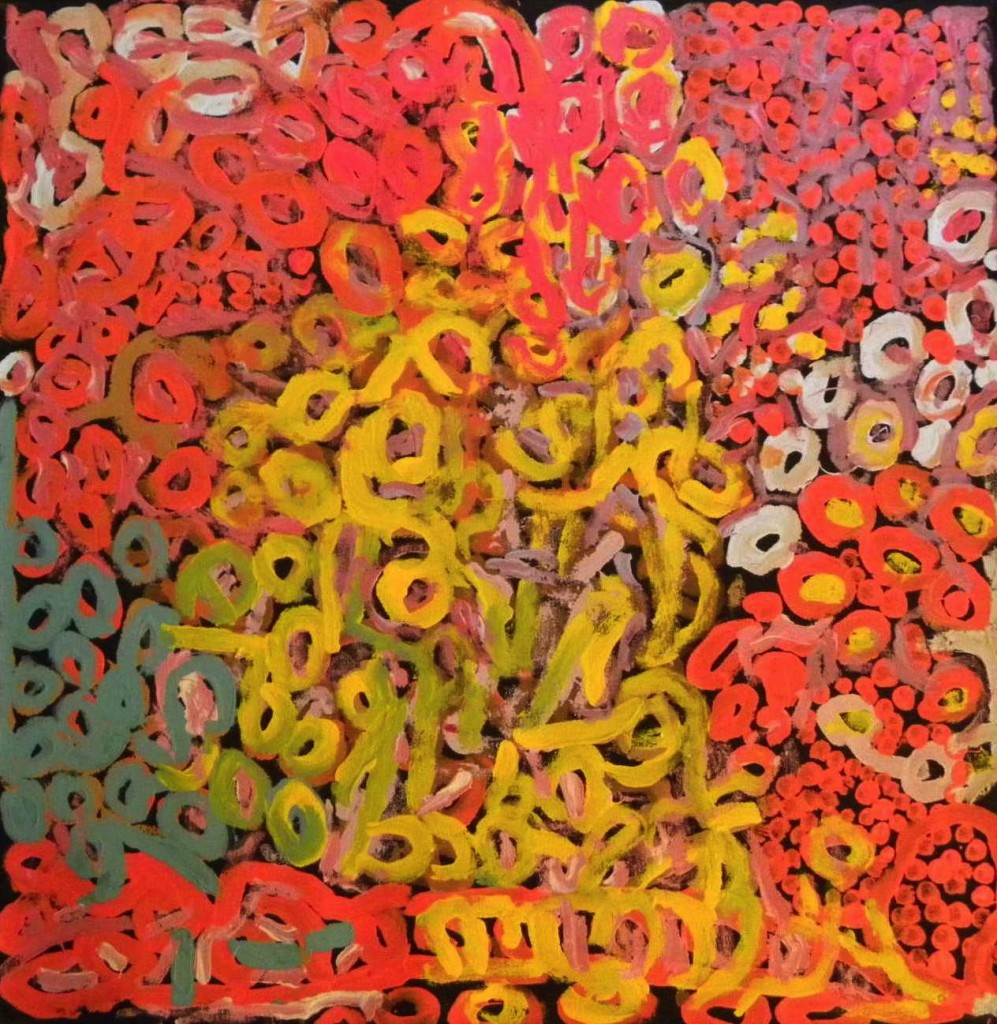 IDAIA – International Development for Australian Indigenous Art – is delighted to announce the first exhibition outside of Australia of Aboriginal artists from the Warakurna community.

In order to convey the community’s strong commitment to cultural transmission and illustrate the great variety of styles, stories and connections to country, the exhibition includes works from a variety of artists; from promising youths to premier Warakurna artists like Tjapartji Bates, Myra Yurtiwa Cook, Dora Waynatjura Lane and Tommy Mitchell. Located in the Australian Western Desert, the Warakurna community is increasingly gaining recognition on the Aboriginal art scene. Renowned for the joy, energy and powerful colours animating their artworks, Warakurna artists have recently been included in major museum collections – most notably the National Gallery of Australia (Canberra), the National Gallery of Victoria (Melbourne) and the Art Gallery of New South Wales (Sydney) – as well as featuring in foremost public and private collections internationally, such as the Museum for Contemporary Aboriginal Art in the Netherlands and the Kelton Collection in the United States.

“Warakurna Artists is one of the most exciting Aboriginal art communities from the Australian Desert. Recent years have seen the rise of their emerging senior artists whose paintings combine vivid colours and such an expressive force, like powerful gems illustrating the Western desert painting movement’s depth and strength” Solenne Ducos- Lamotte, IDAIA’s director.

The selection of artworks includes:

Although recently founded (2005), Warakurna Artists rapidly became a role model as part of the Aboriginal community art centres’ system. Art centres are artistic cooperatives owned by Aboriginal people aiming to guarantee the conditions in which artworks are produced and artists remunerated, the social cohesion and cultural transmission within the community as well as the artworks authenticity and permanent traceability of their origin. The very first official art centres were created at the beginning of the 1970s and are nowadays present in almost all Aboriginal communities. Acknowledged as the ‘backbone’ of Aboriginal art, art centres play a vital role in the development and sustainability of the sector.

Committed to ethical and quality practices, Galerie Kungka works in collaboration with IDAIA, an organisation based in Australia providing the link between official Aboriginal art centres and a network of galleries and institutions around the world. IDAIA concentrates on increasing the presence and the appreciation of a quality and ethical Australian Indigenous art among international audiences through educating, sourcing and facilitating acquisition and exhibition projects.

Lyon is France’s second city after Paris and is home to the growing public collection of contemporary Australian Indigenous Art at the Musée des Confluences, aiming to better appreciate the transformation and evolution of Indigenous culture and showcase artworks mirroring today’s Aboriginal art.