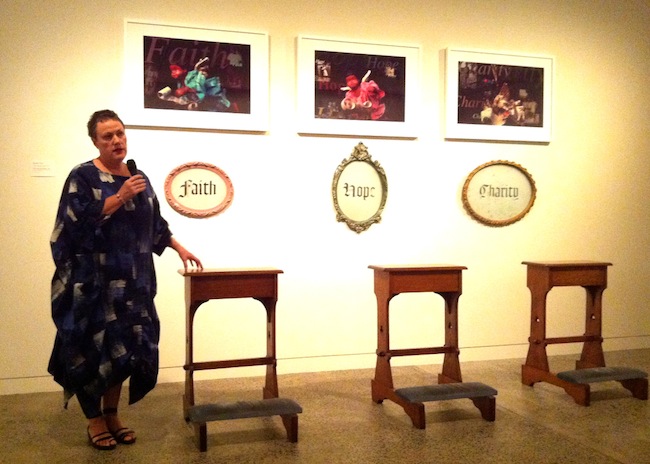 Brenda L Croft is a Gurindji/Malngin/Mudpurra artist, curator and academic.
Born in Perth in 1964, and having lived in many parts of Australia and overseas, she now lives and works on the South Coast of NSW.
Croft first exhibited her work in 1985 in ‘The women’s art exhibition’ at Pier 2/3, Sydney. However,
it was her inclusion in the landmark exhibition ‘NAIDOC Contemporary Aboriginal and Islander Photography at the Aboriginal Artists Gallery, Sydney, 1986, which set her artistic career in motion. Since then she has held many solo shows and been represented in numerous major national and international exhibitions. Croft is a founding member of the Boomalli Aboriginal Artists Cooperative. She is currently undertaking her PhD at the College of Fine Arts at UNSW.
Some of Brenda’s major exhibitions include The boundary rider: 9th Biennale of Sydney (1992), Strange Fruit (1994) and In my father’s house (1998). In 2013, a collection of Brenda’s work has been on display at the Art Gallery of New South Wales.

The other Visual Artist of the Year nominees were: Tony Albert, Jandamarra Cadd,
De Greer-Yindimincarlie and Lena Nyadbi.

The Deadlys® recognise the contribution of Aboriginal and Torres Strait Islanders to our community and to Australian society and showcase outstanding achievement and excellence. One of the most important aims of the Deadlys® is to provide national and local role models to inspire all Aboriginal and Torres Strait Islanders, and particularly our young people. Winners are nominated and voted on by the public.

Sources: The Deadlys and The Art gallery of New South Wales